After 17 years of serving as the Senior Pastor and Head of Staff at the New York Avenue Presbyterian Church, on Sunday June 2, 2019, Pastor Roger retired from his called ministry at NYAPC.

The day began with worship at 10 am including the Sacrament of Communion and the opportunity for anyone in the congregation to come forward to re-affirm their baptism with Pastor Roger.   Kathryn Sparks offered a beautiful dance interpretation to Psalm 90.  Roger preached on Romans 12:1-13 reflecting on how as the church we are charged to be “in the world, with the world, through the world, against and for the world.”

The Adult chancel choir commissioned two special pieces for Pastor Gench.  The first piece, “Benediction Response,” composed by Luke Ratcliffe, was shared in worship based on Roger’s famous benediction “Lift up the Brokenhearted, Stand with the Oppressed,  and Let all of it be in Love, Alleluia Amen.”  The second piece, “Hello, People” (to the tune of Hello Dolly) was part of the reception, a more humorous piece featuring some of our favorite “Roger-isms” including “Cruciformity” and “Palpable.”

Speakers including representatives from BUILD and Brown Memorial in Baltimore as well as members and staff from NYAPC including Mike Smith, Sarah McGinnis, Helen Anthony, and Raymond Newman (in addition to those not named above) gave thanks for the ministry of both Roger and Frances Gench at NYAPC.

Those who were baptized by Roger (including many children and a few adults) were invited up front to help Roger reaffirm his baptism.  The History Committee, represented by Len Shabman, presented Roger with his portrait to be hung amongst the pastors pictures in the JQA room in the church.  Kathryn Sparks, our Director of Liturgical Dance and Minister of Music at Wesley Seminary, concluded the program with a community-engaged dance into the world.

Roger, we give you thanks, for your ministry at NYAPC.  We pray at in the years ahead, you will have the space to reflect deeply, act boldly, and pray fully, doing it all in love.  Thank you!

Rev. Gench will be retiring from 17 years as serving as the Head of Staff and Senior Pastor at The New York Avenue Presbyterian Church in Washington DC.

We invite you to Rev. Gench’s last service leading worship with us this upcoming Sunday June 2, 2019 at 10 am.  Worship will include Communion.

Following worship, all are invited to a celebratory reception in Peter Marshall Hall. 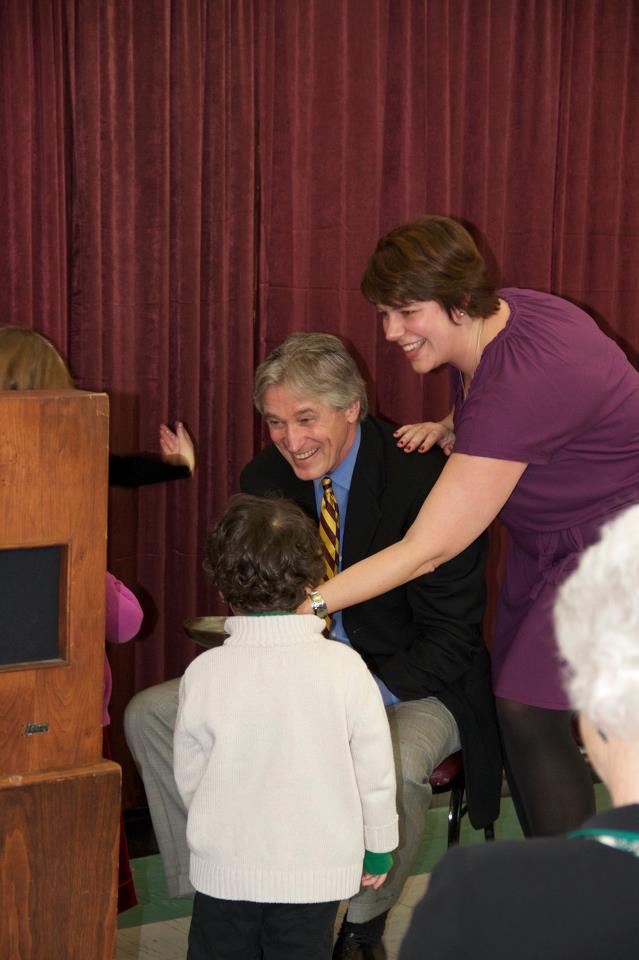 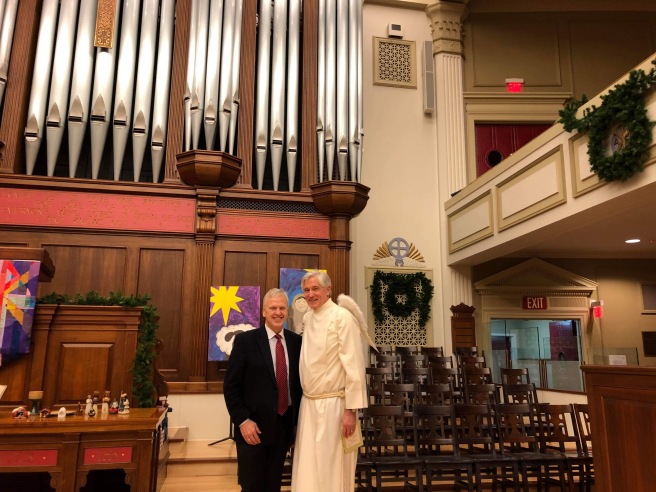 In the midst of so much national turmoil, we have been heartened this week that we have seen so many of you fighting for the cause of justice in our churches on behalf of immigrants and refugees around world.   We write to you today as members of the PCUSA with a request for you to sign onto a petition from members of our denomination to stand up in one voice against the Executive Order suspending refugee resettlement.

It is our conviction that Jesus stood with the most vulnerable in his midst on account of his belief that God is alive in the world seeking to transform the situation. In our present circumstance as Christians it our calling and duty to stand up with the immigrant and the refugee.  We believe the executive action issued this week titled “Protecting the Nation from Foreign Terrorist Entry into the United States” is unconscionable and goes against all that we stand for as Christians and as citizens of the United States of America.

Kathy Doan, a ruling elder at The New York Avenue Presbyterian Church, and Executive Director of the Capital Area Immigrants’ Rights Coalition, wrote the linked petition to our fellow Presbyterians in Congress to oppose the Executive order suspending refugee resettlement program and discriminating against Muslims.  On Sunday morning January 29 many members of The New York Avenue Presbyterian Church signed onto the petition.  It is being mailed on January 31.

However loud our members’ voices may be, as proud members, ruling elders, and teaching elders of the PCUSA, we believe we are the most effective when we speak together united as one body of Christ. We believe that it would be most impactful if members of the PCUSA around the country would also sign on to the petition.

Would you sign onto this petition?  Would you share it with your friends and networks who are part of the PCUSA?

Many thanks and blessings,

From Wendy Farley’s The Wounding and Healing of Desire: “In contemplative practice, the incarnate spirit itself is present to receive whatever benefits are to be had from the practice. It does not have to think through everything that happens or should happen and orchestrate the good effects of meditation or yoga or chanting. To a certain extent, contemplative practices are alike in seducing thinking and willing into relative stillness so that our deeper needs can be tended. Bodily practices like yoga or meditation, centering prayer, chanting the Psalms, gardening, or drawing relax the body so that the toxins of stress, fatigue, and tension can he released, allowing the body’s energies to flow more freely. Practices also release discursive reasoning from the burden of micromanagement and in this way permit the body to accept a deeper restructuring. The body digests what has happened to it, loosening habitual attachments and passions, purifying the “rubbish” that accumulates within us and allowing consciousness to flow more easily. The opposite can also be said. Contemplative practices allow the stillness of the divine to work in us, less impeded by the mind. They remind us that we are not in charge of what happens but that when we relax into whatever practices are helpful to us, we give more space to the efficacy of grace. The aim of contemplative desire is the gradual recovery of freedom to love. Through the transformation of desire, we walk a path that integrates all of the parts of us and engage practices that energize our spirit. Our bodies burn off obstacles so the hold of passions can he weakened. We come nearer to our vocations, both the vocation of all beings to incarnate Divine Eros and our own unique form of that incarnation, whatever it is.”

From Thich Nhat Hanh’s The Heart of Buddha’s Teaching: “The capacity to be happy is very precious. Someone who is able to be happy even when confronted with difficulties, has the capacity to offer light and a sense of joy to herself and to those around her. When we are near someone like this, we feel happy, also. Even when she enters hell, she will lighten up hell with the sound of her laughter… Ask yourself, “Am I like that?” At first glance, you might think not. You might have an inferiority complex, which is the second kind of pride. Please …look deeply into your store consciousness to accept that the seed of happiness, the capacity to love and to be happy, is there. Practice joy. You may think that washing dishes is menial work, but when you roll up your sleeves, turn on the water, and pour in the soap, you can be very happy. Washing the dishes mindfully, you see how wonderful life is. Every moment is an opportunity to water the seeds of happiness in yourself. If you develop the capacity to be happy in any surroundings, you will be able to share your happiness with others.”

This teaching corresponds to Paul’s Fruit of the Spirit in Galatians 5:22-25: “By contrast, the fruit of the Spirit is love, joy, peace, patience, kindness, generosity, faithfulness, gentleness, and self-control. There is no law against such things. And those who belong to Christ Jesus have crucified the flesh with its passions and desires. If we live by the Spirit, let us also be guided by the Spirit.”

From Pema Chodron’s The Places That Scare You: “It’s hard to know whether to laugh or to cry at the human predicament. Here we are with so much wisdom and tenderness, and—without even knowing it—we cover it over to protect ourselves from insecurity. Although we have the potential to experience the freedom of a butterfly, we mysteriously prefer the small and fearful cocoon of ego….We need to be told that fear and trembling accompany growing up and that letting go takes courage. Finding the courage to go to the places that scare us cannot happen without compassionate inquiry into the workings of ego. So we ask ourselves, “What do I do when I feel I can’t handle what’s going on? Where do I look for strength and in what do I place my trust?” The Buddha taught that flexibility and openness bring strength and that running from groundlessness weakens us and brings pain. But do we understand that becoming familiar with the running away is the key? Openness doesn’t come from resisting our fears but from getting to know them well.”

From Wendy Farley’s Wounding and Healing of Desire: “We may believe desire for our Beloved should itself automatically clean us of all of our obscurations, but there is no direct route that bypasses the wounds of our psyches. Contemplative desire is like an athlete, intent on the Olympics. An athlete may wish an injury were gone or had never happened. Despair over the injury guarantees defeat, but to suppress knowledge of an injury can give it the power to become permanently debilitating. The only way to remain an athlete is to work with doctors and trainers carefully and skillfully, neither despairing over nor ignoring the injury. In this way, the injury will be transformed so that it does not exclude the athlete from the games. It can even happen that the courage to press one’s limit in ways that risk injury, or something in the injury itself, or the process of healing, or the tenacity sustained throughout every aspect of practice, conspire to contribute even greater prowess than if no injury ever occurred.”